We believe all children can love learning math.

Today, that doesn’t happen for most kids. Among both children and adults, math is often fraught with anxiety and fixed mindsets.1 For example, while it would be shocking to hear a parent with their seven-year-old child in earshot say, “My child is just not a reading kid,” it is not uncommon to hear, “My kid is just not a math person, like me.” At Zearn, our work as a nonprofit curriculum publisher is focused on supporting students, teachers, and administrators with curricular materials for teacher-led and digital instruction, classroom structures designed for differentiation, and comprehensive professional development to ensure that every child loves learning math. We recently conducted a survey, Mindsets Toward Math, to develop a baseline understanding of students’mindsets about math and to explore how they can be improved. Similar to the recent findings from the 2017 NAEP survey of students’ sense of well-being in school,2 we found some positive and surprising results.

To understand students’ mindsets toward math, we surveyed nearly 345,000 third through fifth graders and analyzed their self-reported responses along with their Zearn Math learning-behavior data.

The survey was designed with the help of experts in developmental psychology at Character Lab3 and The Mindset Scholars Network4 to measure students’ mindsets toward math, learning, and their perceived learning abilities. Nearly 345,000 third through fifth grade students across over 2,500 school districts completed the survey. Students in district settings represented 89% of our respondents and 29% were from high-poverty schools (in which over 75% of students are eligible for free or reduced-price lunch). This parallels the 24% of students across the US who attend high-poverty traditional district and public charter schools.5 Students completed the survey as a part of their Zearn Math digital experience in the spring of 2018.6 Responses were tied to students’ learning-behavior data from Zearn Math Independent Digital Lessons, and anonymized results were analyzed in aggregate. This provided us with a unique lens through which to contextualize students’ mindsets about math and learning with how often they struggled with grade-level content.

Contrary to popular belief, the majority of third through fifth grade students surveyed reported that they like or love math; however, there is a downward trend in feelings toward math as students get older. Irrespective of their feelings toward math, 93% of students believe that doing well in math is important.

Nearly 80% of the 345,000 students surveyed reported that they “love” or “like” math, with over 40% of students saying that they “love” math. In each grade, most students are positively disposed to math. At the same time, the survey results echo what has been seen in the literature: as students progress through school, their mindsets about math and about school itself become less positive.7 For example, in third grade, 48% of students responded that they “love” math; in fifth grade, only 34% responded similarly, a 14-point difference. (See Figure 1.) These trends held for students in both high-poverty and low-poverty schools. Interestingly, when asked whether it is important for them to do well in math, 93% of students responded that it is, including the majority of students who said they “do not like” or “hate” math. Students in high-poverty schools were slightly more likely to respond that doing well in math is “really important” than students in low-poverty schools.9

Much of the change in mindsets as children get older can be attributed to a subset of students; students who struggle with math self-report a more negative disposition toward math.

When students learn with Zearn Math, they work through Independent Digital Lessons that allow students to learn and practice grade-level concepts with rich digital manipulatives, interactive videos, paper and pencil transfer, and personalized remediation. At the end of each Independent Digital Lesson, students demonstrate understanding in a portion of the lesson called the Tower of Power. When students get part of a question wrong within the Tower of Power, they receive scaffolded remediation at the precise moment of misconception and then are given the opportunity to try again with a new problem. If the student continues to struggle in the new problem, their teacher is alerted. We analyzed student learning behaviors and grouped students by how frequently they struggled in the Tower of Power. “Non-struggling” students were students whose teachers received less than one alert for every ten Towers of Power they completed during the 2017–18 school year; “Struggling” students were students whose teachers received more than one alert for every two Towers of Power completed. Each group included roughly one-third of the respondents in each grade. When we grouped students in this way, we found that much of the decline in positive math mindsets as kids get older can be explained by the views of a subset of students, those who are struggling with math. For example, 49% of third grade students who rarely struggled in Independent Digital Lessons said they “love math”—the same percentage of struggling third graders who said they “love math.” By fifth grade, however, the difference between the two groups of students is substantial: 40% of non-struggling fifth graders self-reported loving math compared to only 29% of struggling fifth graders. (See Figure 2.)

Struggling students not only like math less, they also report a more fixed view of their math ability. These trends are more pronounced as students get older.

Further, the group of students who struggled viewed their ability to improve in math differently than non-struggling students. Across all grades surveyed, students who struggled with Zearn Independent Digital Lessons were less likely to respond that they think they can improve their math ability in comparison to non-struggling students. (See Figure 3.)

There is a bright spot that emerges in our findings among struggling students in all grades.

When these students had completed three-quarters of their Zearn Math grade-level Independent Digital Lessons, they were more likely to report a belief in their ability to improve in math and a love of math.

Encouraged that students’ mindsets about math can be improved, we are eager to continue evolving Zearn Math so that all students can love learning math.

Although the results of this survey cannot claim that completing Zearn’s Independent Digital Lessons causes a change in students’ mindsets, it is encouraging to see that students’ mindsets about math and learning are trending positively and can be improved. This is fundamentally important given the known association between positive math mindsets and above-average math achievement. The difference in mindsets between students who have completed the majority of the Independent Digital Lessons in their grade and those who have not may be the outcome of the Zearn Math student learning experience: the way students build understanding by learning in multiple ways; the personalized feedback and support they receive; the learning of math as big, connected ideas; and the embedded systems to build a learning mindset. However, it is also evident that there is still work to do to ensure that older students, particularly those who experience difficulty with math, remain engaged and motivated. We hope that we can effectively apply our learnings from this survey to evolve the Zearn Math curriculum and further our mission that all children love learning math.

3Character Lab is a nonprofit advancing the science and practice of character development so all children can reach their fullest potential. Learn more at Characterlab.org.

6This four-question multiple choice survey was accessible through Zearn Math’s digital experience for three weeks; prior to launch, administrators and teachers were informed of the purpose of the survey.

9Students were asked “How important is it to you to do well in math?” Possible responses were “Really important,” “A little important,” “Not that important,” and “Not at all important.”

10Students were asked “No matter how good you are now, can you always get a lot better at math?” Possible responses were “Definitely yes,” “I think so,” “I don’t think so,” and “Definitely not.”

3Character Lab is a nonprofit advancing the science and practice of character development so all children can reach their fullest potential. Learn more at Characterlab.org.

6This four-question multiple choice survey was accessible through Zearn Math’s digital experience for three weeks; prior to launch, administrators and teachers were informed of the purpose of the survey.

9Students were asked “How important is it to you to do well in math?” Possible responses were “Really important,” “A little important,” “Not that important,” and “Not at all important.”

10Students were asked “No matter how good you are now, can you always get a lot better at math?” Possible responses were “Definitely yes,” “I think so,” “I don’t think so,” and “Definitely not.” 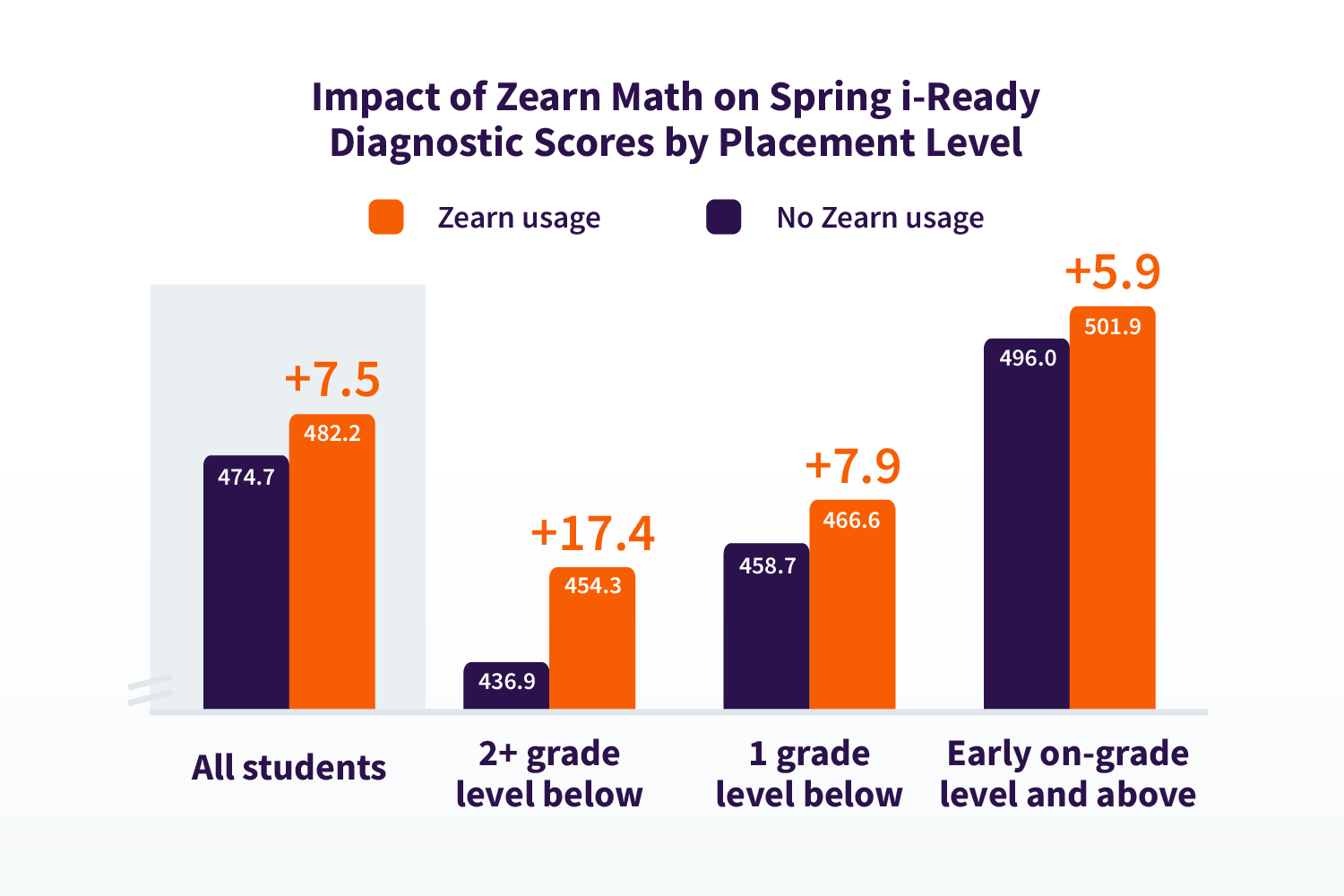 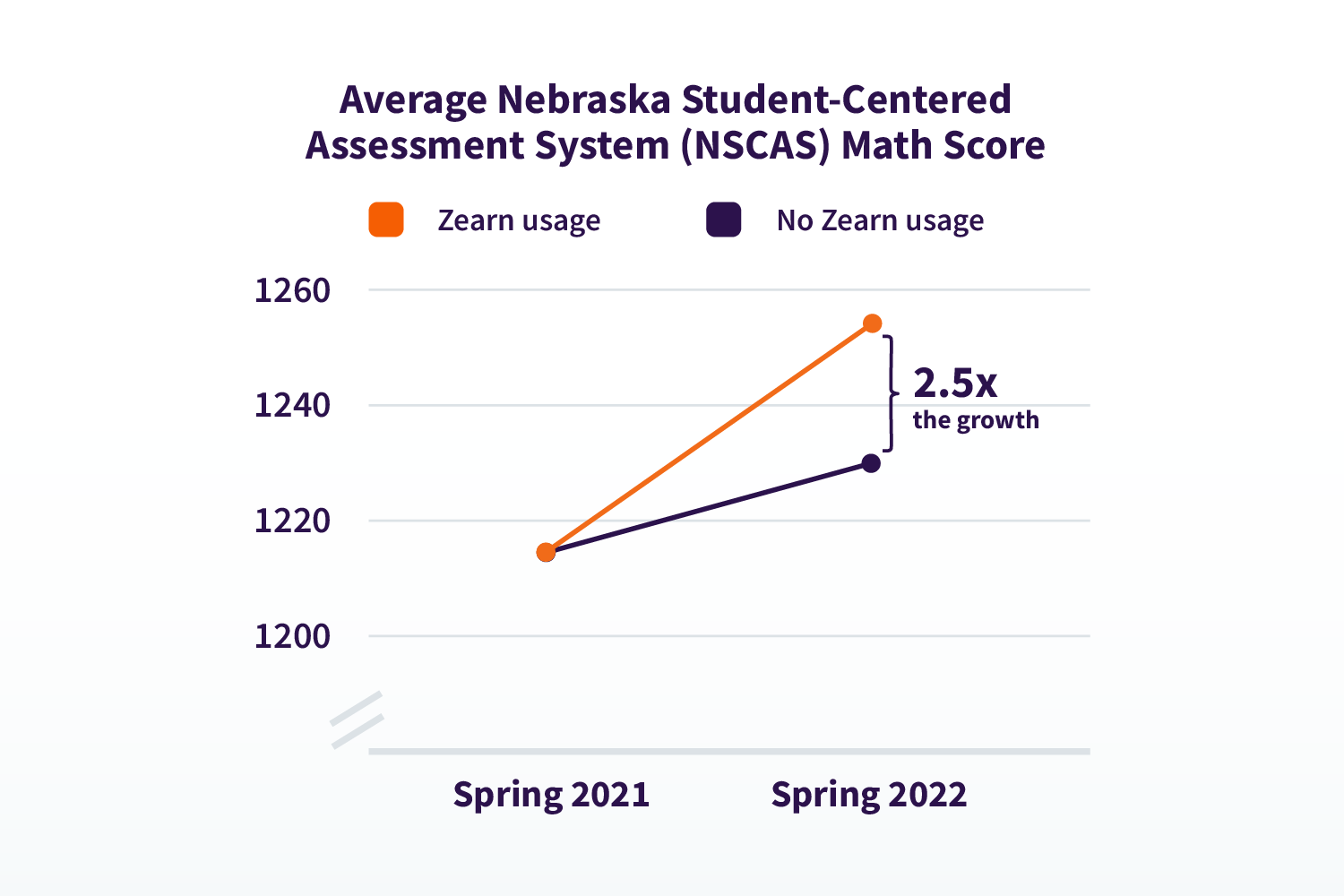 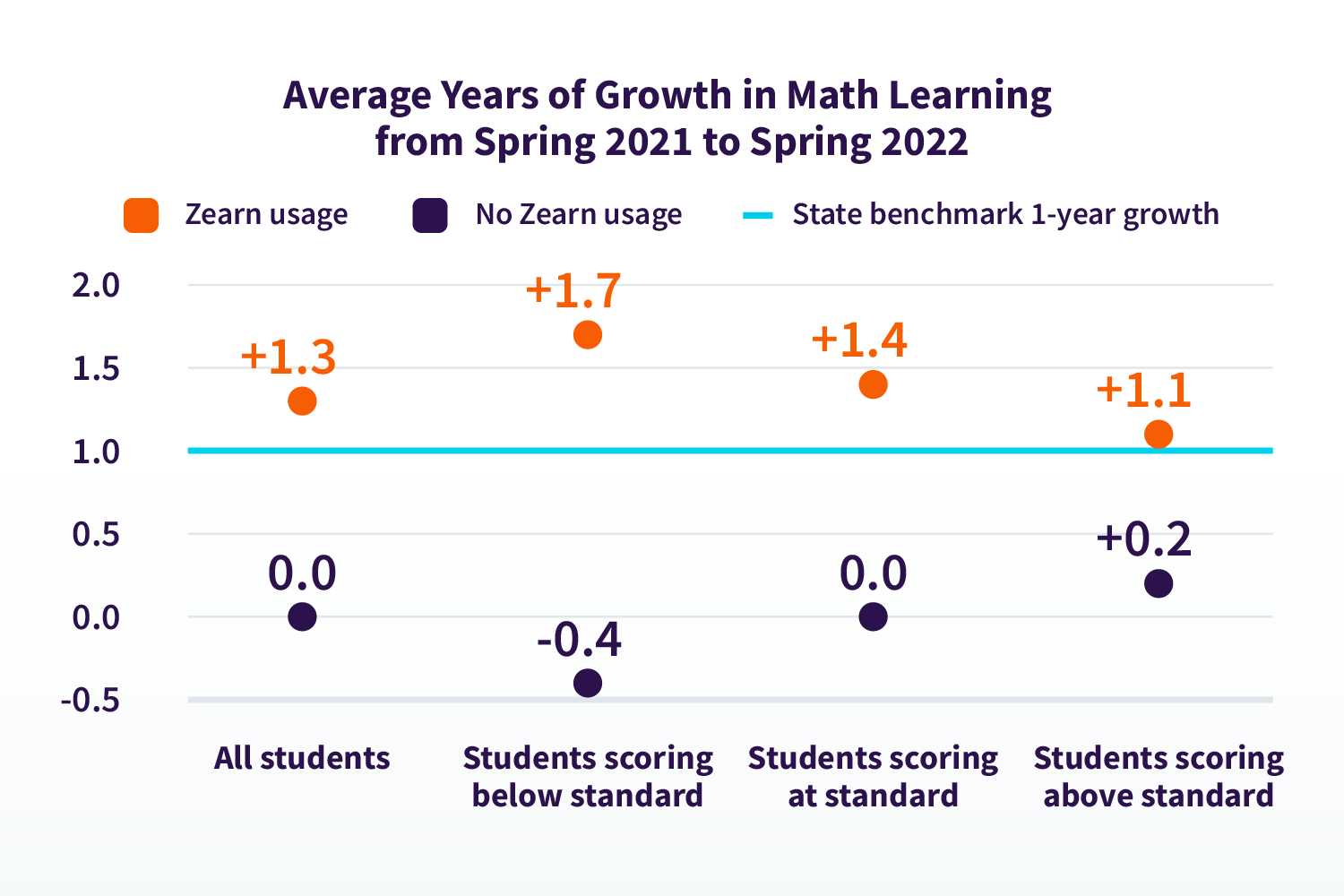 Students who used Zearn Math grew 1.3 grade levels in one year of learning.